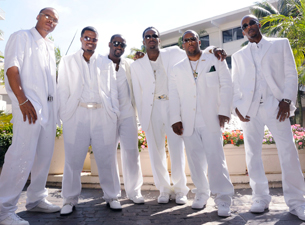 #NewEditionMovie #NE4Life The New Edition Story was a great way to bring us all together on a positive vibe. It helped to take our minds off of this major transition and go back to a time when we were happy and free.

Funny story I went to the New Edition concert with my best friend. I thought I was cute with those cheap $10.00 Rainbow shoes. My heel broke off my shoe. I had to climb up the steps to get to our seats with a broke heel. The walk to get on that SEPTA train was pitiful. You know Philly kids are cruel. They were clowning me so hard. My friend never left my side though, she walked slowly with me as I limped.

Ricky’s drug problem shocked me. They kept that well under the radar. He had a true queen by his side to help him through the overdose and the recovery.

Thanks Ronnie! I love that all of New Edition Reunited at his wedding.

I want to fact check Ralph saying he did all of the work in the group. I remember New Edition back in the day and it seemed that they were one cohesive group. I think Ralph may have been caught up in his own ego. Technically I always thought Johnny was the best singer and Bobby was the best performer. I had the hugest crush on Ronnie.

Bobby unequivocally gave zero cares. He just did whatever he wanted to do. I remember seeing Bobby Brown perform at the Essence Music Festival. No lie they had to put the curtains down on him to get him to exit the stage. Trust me we were over his performance well before he was. Bobby loves Bobby.

I loved Michael Bivins business acumen. He helped keep the R&B groups going with Boys to Men and ABC.

Maurice Starr was a crook! That is terrible how he took advantage of not just one but two pop star groups. New Kids on the Block was also ripped off by him.

Uncle Brooke needs his own star on the Hollywood Walk of Fame. He put in some serious work with those boys. I wonder if he was ever properly compensated?

I have a question: Where were the fathers of these boys? I understand that the mothers were single but not one of these boys had a father, close uncle or someone? (Well besides Ronnie’s Uncle Brook.)

Johnny Gill is the real MVP! He continuously made smooth moves first with the Stacy Lattisaw duet album. His solo albums. New Edition. LSG. The man is talented and blessed.

Special kudos to BET for taking us all back to our happy place. Those days when we watched Video Soul and waited for videos to show on the juke box. I’m smiling thinking about how extra yummy they looked in those white outfits. What’s next BET? I want to see more great content.

What are your thoughts about the New Edition Movie? Who do you want to see next? I think we need a movie on all of the artists from Bad Boy Boy Records. That would be epic. Diddy make it happen!